Phones make us superheroes. To hear the voice of another human from around the world is truly one of the greatest achievements of the 19th century.

When I began setting up my office last fall, I ran across a rotary phone in a box. There was something wonderful to me about the weight, the heft, it had. As I plopped it down, the bell rang a little, and I remembered the excitement I would have as a child hearing the sound. We couldn’t see who was calling when the bell rang, so picking up the handset was to solve a mystery each and every time. I decided I needed to redeploy my rotary phone. Even though it’s much larger than my iPad, it’s one of the only two staples on my desk. Hearing it’s melodious ring every time my nephew calls is music to my ears.

The OBi200 is a small and affordable (roughly $65 on Amazon presently) VoIP adapter. Their web presence feels a little 1987, but the adapter works very reliably over a wired connection. I also tried the USB WiFi adapter, but haven’t been as happy with the call quality, although I’ve only tried it in the most remote corner of the house right against a stucco exterior wall buried in a corner, so it might work a lot better in other environments.

OBi200 has support for up to 4 phone providers, so one could route several numbers to it if so desired. It works great with Google Voice as well. 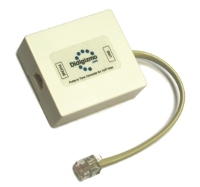 For a while, I just held the handset up to my iPad and dialed numbers on this website. It works pretty well, but requires an iPad to be present. More so, it meant not being able to enjoy dialing on the phone itself, which was an experience I really liked.

Although I don’t think it would be too hard to build a pulse to tone converter, I am notoriously lazy, and found the lovely dialgizmo easy and sufficient for my needs. In addition to numbers, it can also dial # and *, as well as a couple of speed dials.

So, for about $100, I now have a rotary phone on my desk that requires no monthly service fees. Not that I would even advocate having a VoIP landline for most people, but compared against what Xfinity would charge for the service the upfront costs of the OBi200 with no recurring fees seems like a no-brainer.

I meet so many people who are being taken advantage of by their telecommunications companies. Many companies have confused services with service. I don’t want my ISP to sell me programming, I just want it to provide really good, really cheap internet access. Interestingly, it seems a number of cable companies are realizing that they make money doing precisely that.